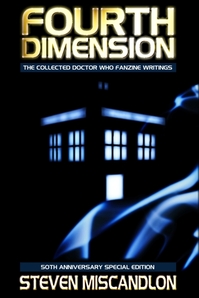 The early 90s was an … interesting time to be a Doctor Who fan. The BBC had cancelled the programme in 1989 after twenty-six years on the box. Those who harboured a hope that the show would be revived after only a brief rest were to be disappointed – Doctor Who wouldn’t return to British screens until the Paul McGann TV movie aired in 1996.

They were the wilderness years.

Even in the absence of the programme, the fan scene thrived. Doctor Who was all around, if you knew where to look. In addition to the official Doctor Who Magazine, there were numerous fan magazines being produced, from photocopied A5-sized efforts to full-colour newsstand-quality publications. A true labour of love, these zines published short stories, articles, reviews and artwork by fans, for fans. Some publishers, such as Seventh Door Fanzines, were releasing fantastically ambitious novella-length fan fiction.

Perhaps more significantly, in 1991 Virgin Publishing launched their range of New Adventures novels featuring the continuing exploits of the Seventh Doctor – bringing fans “stories too broad and deep for the small screen”. The New Adventures were later joined by the Missing Adventures series, telling the “lost stories” of the first six Doctors.

New material wasn’t just restricted to print, either. Some enterprising fans were producing their own Doctor Who audio plays, including outfits such as Audio Visuals and Fine Line. Several of the fans involved in the Audio Visuals series later went on to help establish Big Finish Productions in the late 90s.

And if you yearned for Doctor Who-related stories that you could watch on your television? Well, we had those too. Reeltime Pictures kicked off proceedings in 1987 with their short UNIT video Wartime. In 1995 they trumped this early effort with Downtime, which featured Brigadier Lethbridge-Stewart, Sarah Jane Smith and Victoria Waterfield confronting the Great Intelligence.

BBV was probably the most prolific producer of Doctor Who spin-off videos. Bill Baggs and his team brought us the adventures of “the Stranger” (as played by Colin Baker) over six separate video features. Their P.R.O.B.E. series (written by Mark Gatiss) showed us the post-UNIT paranormal investigations of Liz Shaw, while their Auton dramas delivered plastic scares aplenty. Perhaps BBV’s finest hour was The Airzone Solution, written by Nicholas Briggs – an ostensibly non-Who-related standalone drama that nonetheless brought together Jon Pertwee, Peter Davison, Colin Baker and Sylvester McCoy.

Throw in Dreamwatch Media’s Shakedown: Return of the Sontarans (starring Carole Ann Ford and Sophie Aldred) and fans were spoilt for choice. And all this at a time when the BBC’s total televisual Doctor Who output over a period of six years was … a thirteen-minute Children in Need sketch to mark the show’s 30th anniversary.

They were only the wilderness years if you allowed them to be.

Between 1992 and 1996, I was quite active in the Doctor Who fan scene. I was a regular contributor of fiction, articles and illustrations to fan magazines such as Capitol Spires, Mandria, Silver Carrier, Metamorph and Shadowsphere, while I also had one-off pieces published in a handful of others, including Game of Rassilon, Club Tropicana, Circus and Borusa’s Trousers.

This book collects most of my fiction and reviews that were published in those magazines, and throws in a couple of previously unpublished treats for good measure.

In Part One you’ll find twelve short stories (two previously unpublished). Some are short, fun pieces. Others are darker and, hopefully, more thought-provoking. Five of the original seven Doctors are represented, so whether you want a tale of the First Doctor leaving Gallifrey at the start of his travels, the Second revisiting Steven Taylor on the planet of The Savages, or the Seventh Doctor facing an uncomfortable reminder of his own mortality, there should be something here for you.

Part Two presents “The Gallifrey Incursion”. This is a novelette-length story I wrote around 1995, but never submitted anywhere for publication. I toyed with the idea of publishing it myself in a fanzine format, but then Real Life got in the way, and it got put in a manila envelope at the bottom of a cupboard, where it lived for the next eighteen years. Featuring the Seventh Doctor, Ace, Bernice Summerfield, Gallifrey, Rassilon and various other guest stars, it’s totally self-indulgent … but all in good fun. I believe it might accurately be described as a “romp”.

For the Capitol Spires fanzine, I wrote a regular column (initially called “New to Who”, later changing to “On Virgin Ground”) reviewing Virgin Publishing’s New Adventures novels, and occasionally other Doctor Who spin-off media. Every one of those reviews is included in Part Three. If nothing else, I think it provides an interesting snapshot of what was happening in the world of Who at that time.

Finally, Part Four presents a handful of reviews of televised Doctor Who stories from throughout the show’s history. Some of these are quite short (where the brief was simply to choose a favourite story from that Doctor’s era and write a few words about why I liked it), others are more substantial. A few of them were written for Capitol Spires’ combined issue 4/5, which celebrated Doctor Who’s 30th anniversary, while the four reviews of Sylvester McCoy’s stories were published as part of a Season 26 retrospective.

As I write this, Doctor Who’s Season 7 finale (“The Name of the Doctor”) has just aired on BBC One, and in a few months we’ll be sitting down to watch the show’s 50th anniversary special. It seems that the programme has never been more popular, and yet in some ways its fan base is very different to that of twenty years ago. I hope you enjoy the various writings that make up Fourth Dimension, and that they will give an interesting insight into the frustrating but exciting world of Doctor Who fandom in the early 90s.